My name is Brittany Keeler Hunsucker and I would like to share with you my experience with Upper Cumberland Human Resource Agency’s STAR program. I walked into UCHRA as a single mother working part-time as a direct support employee at the local nursing home. My dream was, one day, to enroll in college and become a nurse. I had secured low income housing for myself and my girls, but had very little financial or moral support. That day I was emotional, stressed, and feeling overwhelmed. After meeting with the staff at the Fentress County UCHRA office and introduced to the STAR program I felt excited and hopeful for my future.

I enrolled in the STAR program and met my case manager, Balinda Westmoreland, who believed in me even more than I believed in myself. When I felt like quitting, she reminded me how far I had come, and we worked together to overcome barriers.

This was a new way of life for me and it wasn’t easy. I have two beautiful daughters, going through a long drawn out divorce, not yet receiving any child support, working part-time, and now a full-time nursing student. I enrolled my daughters in Head Start and childcare with the help of my STAR case manager and began my new life that included budgeting, credit repair and income management. I graduated from Tennessee College of Applied Technology and became a Licensed Practical Nurse on February 14, 2019 and had employment secured upon my graduation. On June 26, 2019 I exited the STAR program as self-sufficient and have since enrolled in the RN program at ETSU. I have married, bought a house, and welcomed a new baby boy!

I am happy to say I am living my life to the fullest and I have become successful. Thank you Upper Cumberland Human Resource Agency, my case manager and the STAR program. 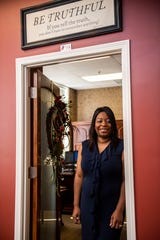 She’s the coordinator for the Head Start program for 13 counties, serving nearly 1,200 children with early education and helping ensure families are self-sufficient while they’re in the program.

Humphreys has a lot of experience with the program.

But being the director is something she could’ve only dreamed about 20 years ago when she was homeless, not knowing what to do with her life as a young mother and searching for direction.

Moving up the ladder

Not only has she been an employee of Head Start for 20 years, she was one who was served by the program.

“I’ve been with it since 2000,” Humphreys said. “I got started right after I graduated from Bethel College (now University).

“I got pregnant during my final semester, and I continued to live with my college roommate and stay here instead of moving back home to Memphis because I wouldn’t have been able to afford housing.”

Humphreys’ first job out of college was serving as a family advocate at Washington-Douglass Head Start in East Jackson. She served there for a year before transferring to a similar position with Head Start in Huntingdon.

While she was working in Huntingdon, Humphreys’ other role as a member of the Army Reserve called her away from home and work as she was deployed in Iraq for a year.

“Fortunately my mom, Lucy Maggit, was able to move to Carroll County and took over the family care plan for my son, which allowed him to continue in Head Start when he was 3 and 4 years old,” Humphreys said. "She made so many sacrifices for me, and this was another."

“In that role, I oversaw pre-K programs and some site centers in Benton County, Henry County and Carroll County,” Humphreys said. “It was a challenging role, and all of them have been as I’ve took on more responsibility and had to learn new skills.

“But it was a rewarding experience that I enjoyed for six years.”

Humphreys’ career took a slight turn in 2016 when she was promoted to compliance manager for all of Northwest Tennessee Head Start, where her job was to ensure all regulation policies were being followed and no programs were deficient in service areas while also promoting health and safety in all of the region’s sites.

The role transitioned to operations manager, and that added supervising all 17 site coordinators and also developing programs to ensure staff had correct qualifications and credentials to provide development for their chosen programs.

It was then in January of this year when she was promoted to the director position for all of Northwest Tennessee.

“I feel like I got plenty of experience over the previous 20 years as a parent, family advocate, consultant for Camelot to help in outreach for children at risk and connect with their families and figure out ways to help all involved,” Humphreys said. “For the families whose children are in the program, I can tell them I’ve been where they are and have dealt with similar issues that a lot of them are dealing with and my children came out on the other side better.

“My family came out on the other side better because of this program, and that’s why I believe in it so much.”

Humphreys said becoming a social science major while at Bethel was not her first choice. She planned to get into the medical field when she started college.

“But I struggled in chemistry, and I really thrived in social science classes,” Humphreys said. “So when I found myself in the situation I was in at graduation, I can look back at that time now and see that God was calling me into a field where I could do what I was supposed to do – give back and serve families that were experiencing poverty.

“I experienced that too growing up in Memphis. I grew up homeless, and my mom was young when she had me, so we almost grew up together.”

Humphreys said she witnessed domestic violence when she was a child, and she and her mother were displaced multiple times.

“I never knew about Head Start, and there was no awareness of the services that were available to me,” Humphreys said.

Now in her role leading Northwest Tennessee Head Start – particularly as families struggle in the middle of the COVID-19 pandemic – she wants to make sure no child in the region grows up ignorant of the services available to them like she did.

“We want to let people know about what is available to them,” Humphreys said. “We want to help parents become self-sufficient and get them in position to reach their career goals.

“I didn’t realize Head Start had this capability when I first came. I was just excited to have a job after graduation that paid me $10 an hour.”

Humphreys said her vision has changed from helping herself and her own family to helping others.

“I believe this program is essential as we’re providing services for families that for whatever reason are in a position where they can’t help themselves,” Humphreys said. “If they’re running out of formula for their baby, then we want to be there to help as much as we can if they can’t take care of that themselves.

“We’ve kept a watchful eye on families to make sure domestic violence hasn’t become an issue while everyone has had to stay at home. Taking care of families and making sure the children and their parents have every opportunity available to them is our goal, and that’s what we strive to do every day.”

Reach Brandon Shields at This email address is being protected from spambots. You need JavaScript enabled to view it. or at 731-425-9751. Follow him on Twitter @JSEditorBrandon or on Instagram at editorbrandon. 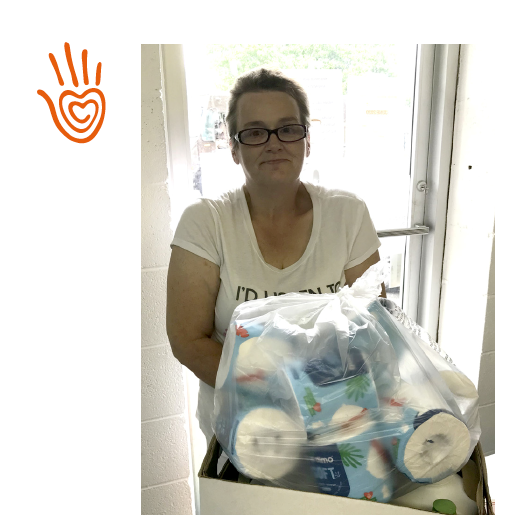 Living in the Dark

Through our Neighborhood Service Center, we helped her with her gas and electric deposit, but our help didn’t end there. Ms. Morris was going to have an operation on her hand and needed cleaning supplies to sterilize her home. We were able to provide her with the cleaning supplies she needed, a Food City gift card, and gas for her car.

Ms. Morris’s story sadly is not unique, but how rewarding it was to give her a hand up in her time of need.

TACA works to strengthen its members as they work to build a stronger Tennessee through comprehensive anti-poverty plans and strategies.